Hartford: The Race, the Results, and the Reflections

Let me start with a summary. I registered for the ING Hartford Marathon because I wanted to run a fall race, my previous trips to the Hartford area left me intrigued, and the race rightfully enjoys a good reputation among runners. Frustrated with my own limits, both in performance and understanding, I began working with a certified running coach. Based on my past races and my response to early workouts, he established a time goal for my marathon finish. I never verbalized it—at least I don’t think I did—but I doubted my ability to achieve the goal. Why? Who knows. Perhaps it’s related to my ability to better articulate the negative than the positive. You can see the questioning in my face while I stand at the start line.

The race itself was glorious, and I mean that without any exaggeration. The weather was as close to perfect as possible; the course took advantage of Hartford’s natural, architectural, and rural beauty; and the city did an exemplary job of hosting the event. I can’t say enough about the outstanding organization of this marathon. I feel like I have been spoiled for other races, as most will likely pale in comparison to how Hartford ran its race.

I ran unevenly at first, trying to control my pace but often slowing down or speeding up in the last quarter of each mile to hit the target. Somewhere after the fifth mile, I heard one runner say to another, “You can’t be running more than a 9-minute-pace at this point! Stick with me.” He wasn’t talking to me, but I followed orders anyway. Somewhere near a 9-minute pace was my target, too. And if he could keep it consistently, I’d benefit by “drafting” him and the runner he was pacing. 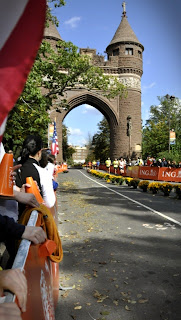 After about two miles of my staying just off his shoulder, he turned and spoke to me. Turns out, he is a running coach, and the runner he was pacing was one of his proteges. She was attempting a goal similar to mine, which was a sub-4-hour finish. If there is one thing I know about my own coach, it’s that he has “cruise control”; the man can find a pace and hold it steady for miles. I assumed this coach, dressed in a NY Giants jersey (who runs in that in New England?!?), had a similar ability. He did. Every significant mile marker my coach had suggested I attend to revealed that I was on pace to achieve the goal.

To keep it short, I’ll mention that the 24.77 mile mark on my watch was the first time I looked to see how much farther it was rather than how I was doing on time. An inclined ramp onto a bridge enters the course about the point, and the headwinds had picked up throughout the morning. But crossing the bridge and seeing crowds of people gathered around the old State House in central Hartford fueled my desire to finish strong. A couple of turns, and the inspiring finish area came into view. This race has one of the most spectacular finishes anywhere, as runners run under a memorial arch in the city’s largest park. When I crossed, I was flooded with emotion. I was laughing and then nearly crying in short, 5-10-second bursts. I could not believe I had done it. I was so happy. Pleased for me, and pleased for my coach.

Unfortunately, I lost the Giants’ jersey and his runner just before the finish. I think they probably finished 30 seconds (or so) ahead of me. However, the runner found me in the finish area. She congratulated me, and I her, and I begged her to thank her coach. They were a major part of making the day a success. (One reason I love running is because on the race course, the sense of community is incredible!) 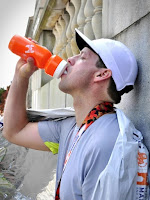 So, what’s going on in my head now? Yesterday I ran with my coach for the first time since the race. It was good to get back to something that felt normal, and yet, it was not the same, either. I’m different. Not because I achieved the goal, which realistically puts me solidly in the “average” category of runners. It’s more about yearning for what is next. I know now that in running, I can work for and achieve a goal. It won’t happen with every attempt, but it’s possible.

I’m sure some would call this “confidence.” I don’t feel that. What I feel is more a positive perspective of what the future can hold. I still have work to do, effort to put forth, improvement to make. And I recognize that I may never achieve all of my running goals. For some reason, that all matters less than it did before because I have experienced the possible.

At the finish area, while I guzzled water from an orange, ING-colored water bottle and held the sheet of foil around my shoulders, my wonderful wife asked, “Was it worth it, all those early mornings?” 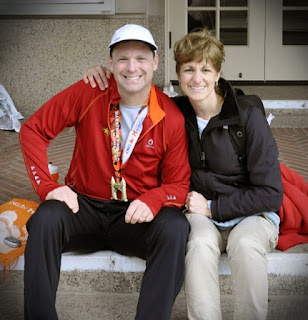 No hesitation on my part. “Yes, yes. It was so worth it.” I didn’t add “because I am different,” but I think she sensed it.

I usually make some connection to teaching and learning in these posts, and there is plenty here to consider, but I think I’ll let you, the reader, find the implications that are meaningful for you. In conclusion, it dawns on me that major achievements are rarely a solo endeavor. My coach deserves major recognition. As he says, I did the running. But, it was his head, his expertise, that got me to the start line and made the accomplishment possible. The coach and runner I drafted were an unexpected gift, and my thoughts of Hartford will always include “chasing” a NY Giants’ jersey. And, of course, my wife, who not only supports these crazy pursuits in every way, but even documents them with her excellent eye and camera.

This is my best attempt at processing the experience. And as I told my coach yesterday, the whole thing still makes me smile.

Let’s chase whatever is next!

Kevin D. Washburn, Ed.D.
Kevin D. Washburn holds a doctoral degree in Educational Leadership with an emphasis in instruction and curriculum. His experience as a teacher in elementary through college level classrooms and positions in curriculum and instruction combine with his penchant for reading and research in both educational and scientific areas to uncover important implications for learning. Whether speaking in the classroom or convention setting, Dr. Washburn seeks to imbue a passion for quality instruction. He is the author of The Architecture of Learning: Designing Instruction for the Learning Brain (9780984345908)